More than 300 voices were silenced as emergency sirens blared.

Outside, a tornado hit, spreading debris across the scene and smashing cars. Its high winds derailed a nearby train, causing a massive fire. Firefighters surged to extinguish the flames as nursing, medical, and public health students rushed to find and help victims.

Fortunately, the calamities were all part of a well-scripted scenario, staged at the Houston Fire Department’s Val Jahnke Fire Training Facility, and orchestrated weeks in advance.

Students from Cizik School of Nursing at UTHealth, McGovern Medical School at UTHealth, and UTHealth School of Public Health participated in the mass casualty incident drill on Friday, Nov. 15. In all, 325 students were involved, many  portraying victims, while 25 faculty members assessed their responses.

The annual drill offers UTHealth students and EMS  students from surrounding community colleges the training they need to hone their emergency first-responder skills in a realistic simulation by presenting them with a rare opportunity to learn with experienced faculty and staff by their side.

Students quickly assessed the severity of more than 65 victim’s injuries. The Harris County Institute for Forensic Sciences was on hand to help transport the dead to “morgues,” while students prioritized the triage of survivors to three hospitals.

Nursing student Colin Hills said his background in EMS was helpful coming into the scenario. He remarked that it felt like he was jumping from place to place trying to help as students triaged patients into groups ranging from the most critical to the least.

“The biggest lesson from today is these scenarios are chaos,” Hills said. “There are a lot of questions about what your job is, and where you are supposed to go. Over time that kind of gets sorted out by finding a hole and filling it. The takeaway is to figure out, ‘How do I plug into what is happening, and how can I help out and solve problems?’”

Selected students from all of the schools played victims, complete with elaborate stage makeup coordinated by the simulation lab experts from the medical school and nursing school. Faculty and staff from the nursing and medical schools assisted in the application of this moulage makeup.

Most victims had simulated trauma injuries, where the moulage makeup made to look like broken glass and flying debris were embedded in their flesh. Others injuries presented were bloody limbs or burns, complete with peeling skin.

One of the “victims” was Madison Ketchum, a third-semester nursing student. Ketchum had a penetrating abdominal injury for the drill.

“I'm going to do my best to sell it,” Ketchum said before the drill began. “I’ll be panicky and yelling at people to help me. I’m bleeding out and hemorrhaging. My vitals aren’t good.” 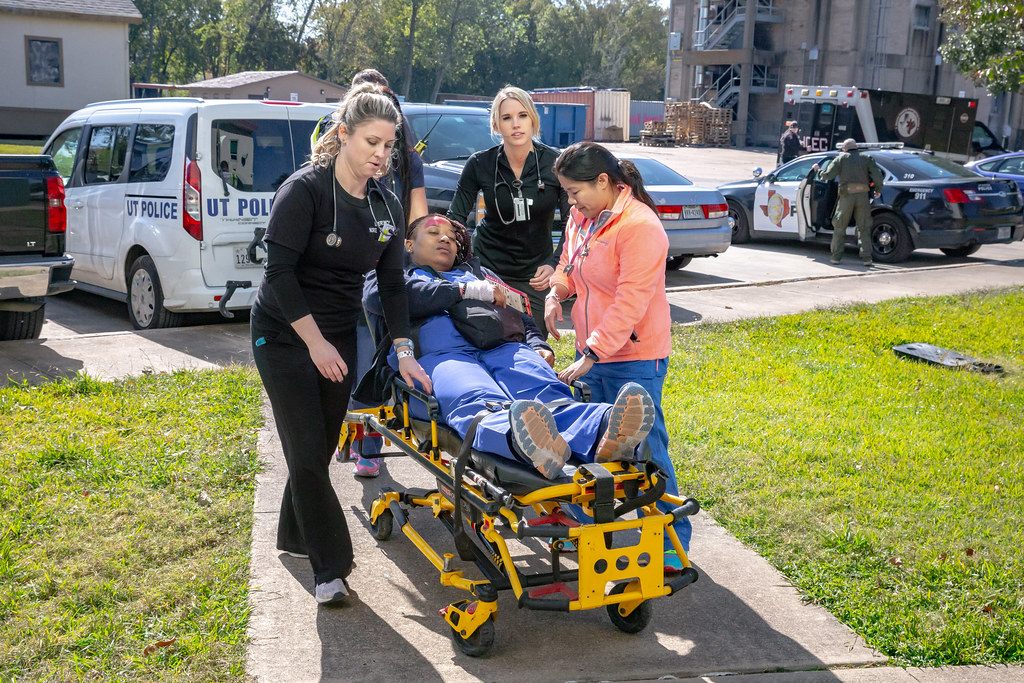 Being able to experience a disaster in a controlled setting is invaluable to our students, said Deborah McCrea, EdD, MSN, RN. McCrea is an assistant professor of clinical nursing in the Department of Graduate Studies at Cizik School of Nursing and one of the organizers of the exercise.

“Nurses and other medical professionals don’t often get to experience what it’s like to work in a prehospital setting,” she said. “It’s a role you have to respect because it doesn’t involve working in a sterile, controlled environment with lights. It’s not a comfortable setting. Students need to see that things that are not sterile and clean. For instance, prehospital medical personnel often have to care for patients on the street, in all types of weather and lighting conditions. A paramedic has to learn how to make do with what they have with them, such as intubating a patient with only the lights of the ambulance while it is raining, in order to save someone’s life.”

In its fifth year, the training exercise was born from a different disaster.

“This event all started in the aftermath of Katrina in 2005 when I realized so few people, not just nursing or medical professionals, knew what to do when disasters happen,” said Elda G. Ramirez, PhD, RN, professor of nursing at Cizik School of Nursing and project director of the mass casualty incident drill. “Our goal is that every single student who goes through this exercise is going to be able to know what to do when any kind of natural or man-made disaster takes place.”

Organizers said they also wanted to incorporate more chaos to mimic the unpredictability of a true disaster.

“We want some chaos in the event so the students will see, learn, and maybe realize what they don’t know or what areas they need to study more,” McCrea said. “We want complexity and chaos to help heighten their awareness and their learning process. We actually want them to be confused.”

“When I approached the scene, I was confused. It looked so real to me,” he said. The first person I came to, I thought was dead. I checked for their pulse. I checked the radial pulse. She wasn’t breathing. It jumped out how much desire I had to see my patient be alive.”

Okunola said he was reminded of the importance of reassessing patients, as one of his began to deteriorate in the scenario.

“Early intervention and continual assessment are important,” he said.

In the afternoon, students focused on the hospital side of a disaster, as each of the three simulated hospitals dealt with its own emergency.

After running on emergency power for a long period of time, the generator system at one of the hospitals caught fire, forcing evacuations of patients into two already at-capacity facilities.

As students worked to get those patients situated, a woman walked into another of the hospitals covered in splotchy red dots, prompting a measles protocol.

Meanwhile, officers from UT Police at Houston responded to a hostage situation at the third hospital, where an armed man, confused and angry over the inability to find his beloved wife, took hostages in an attempt to get answers on his wife’s whereabouts.

Police worked to defuse the situation while students shuffled existing patients around to accommodate the newly evacuated ones.

“It’s an excellent opportunity for UT Police, which is involved with emergency management, to get involved with our students and faculty,” said Sgt. Scott Barnwell with UT Police. “It allows us to participate in the research and development of best policies and procedures surrounding mass casualty incidents and emergency management. It goes a long way to help create the personal connections that make critical incidents easier to handle.”

The event and its complex scenarios were orchestrated by Cizik School of Nursing in collaboration with the Houston Fire Department utilizing the Emergency and Trauma Care Education Partnership Program grant through the Texas Higher Education Coordinating Board.

“It's been a wonderful partnership with UTHealth,” said Houston Fire Captain Fuentes, who acted as the commander over the simulation. “There is great value in training the next generation. You have to pass down the experience and the hard lessons you learned. You want to help prevent them from making mistakes. You can read a lot of textbooks, but firsthand knowledge is a big piece. To be able to give students that is huge.”

Students also donated nonperishable food items as part of the drill, which will be distributed to area food banks.

“Simulations like this give students an opportunity to learn how to better communicate in stressful times, and make sure their message is heard and received the way it was intended,” said Stephen Jones, program manager of interprofessional education. “It gives them opportunities for understanding their own response during stress in a health care environment.”